Land is one of the best investments in real life. It does not depreciate in value (usually) and will remain in good condition.

It also requires almost zero maintenance and since useful land is a finite and rapidly decreasing resource, its value can only shoot upwards.

What is Land in Axie Infinity?

Set in Lunacia, the world of Axies, land in Axie Infinity is similar to land in real life. If you own a plot of land, you will be able to build structures, decorate them, and explore the area. 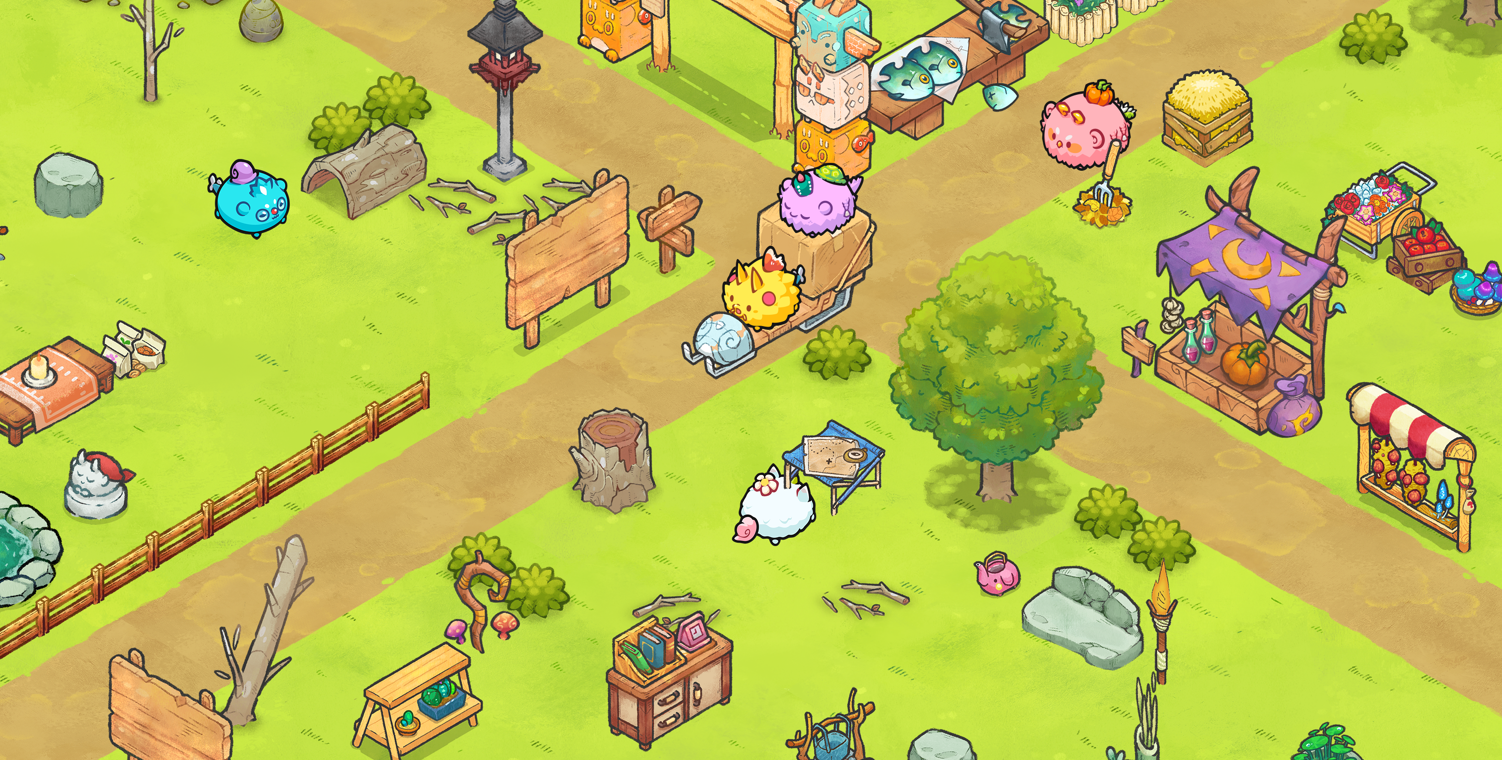 Plots of land are made up of a 301×301 area and are filled with resources…and enemies called Chimera.

So far, there isn’t much known about land in the game and some information is purely based on speculation.

There are 4 main types of land in Lunacia: Savannah, Forest, Arctic, and Mystic. There are also special types of land you can get, dubbed Genesis Land and Luna’s Landing. The initial sale of land put 17,207 plots of land in the Northwest Quadrant up for grabs. 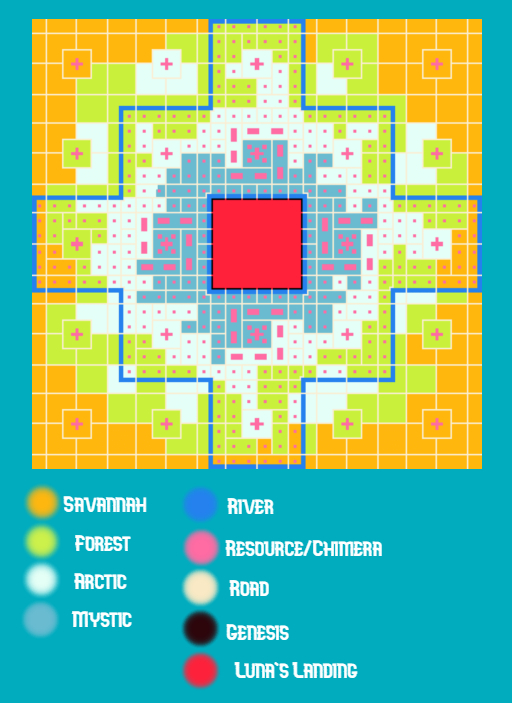 Land was originally sold in bundles called chests and came with different items depending on the type of chest one bought. There are also different types of land that vary in value, rarity, and location.

Originally costing .05 ETH per chest, plots of land in Savannah are furthest from the center, which is why they are relatively the cheapest plots.

The Savannah chest came with at least 2 Rare items, 8 Common items, and an extremely low chance of containing Genesis Land (0.07%).  A total of 5,349 plots were available and sold. Marked in orange.

Forest chests originally cost 0.16 ETH at the time of sale as they are a bit closer to the center than the Savannah. They contained at least 10 Rare items and a very low chance of containing Genesis Land (0.22%).

A total of 5,359 plots were available and sold. Marked in lime green.

The Arctic chest was priced at 0.45 ETH on release and contains 2 Epic, 3 Rare, and 5 Common items, and are the next closest to the center.

They also had a low chance of containing Genesis Land (0.63%). A total of 4,171 plots were available and sold. Marked in white.

Last of the 4 main land types–as well as the most valuable chest–the Mystic chest was originally priced at a whopping 1 ETH per unit. It included at least 1 Mystic, 3 Rare or higher, and 6 Common items.

It also had the highest chance of giving a Genesis Land (1.4%)  A total of 2,238 plots were available and sold. Marked in steel blue.

The location of each plot of land is random, but buying multiple chests in one transaction ensures that each plot would be connected. Unfortunately, the initial sale already took place on January 21, 2019, so purchasing land this way will be impossible.

However, you can still buy land, items, and other bundles at the marketplace, albeit at a much higher price (a Savannah plot starts at 3.85 ETH/$11,457 at the time of writing), or wait for the next land sale to commence.

Special types of land were also introduced and cannot be acquired through conventional means.

Each chest has a small chance of rolling one. This type of land surrounds Luna’s Landing and will contain special content such as raids and Chimera bosses–and the owner of the plot gets a cut of the spoils.

What Can You Do with Land?

As previously stated, each chest had a chance of containing a certain number of items out of the 199 total. These items could then be placed in your plot of land and would provide Axies with increased stats such as higher speed or damage, speed of wood chopping, and increasing the amount of dropped Luna that can be collected.

It’s also important to take note that an item may consume 1 or more spaces in your plot (a plot has 64 spaces), so if you have a lot of items, you may be forced to pick and choose your favorites.

More information can be found at the item sorter page here.

Resources are in-game items that can be earned, traded, and possibly sold in the future. Currently, here are the following resources available in land gameplay, as well as where they can be found, what they’re used for, and what they can probably do:

Smooth Love Potion (SLP) – Can be earned through fighting Chimeras.

Wood – Can be earned by chopping wood. Would probably be used as building material.

Stone – Can be earned at the Quarry by mining. Would also probably be used as building material.

Herb – Can be earned by visiting a Farmyard. Usage is still unknown, but speculations point to healing.

Gold (no icon yet) – Would probably be used as building material.

These resources can be harvested or dropped by Chimera; all of them tokenized.

The land of Lunacia has its own currency in the form of Luna. Not much is known, other than:

Luna is reportedly used to:

The information we have on buildings is also scant. Not much is known aside from the information that the homepage of Land Sales has given us.

Battle Tent – Unknown; could be PvP-related

Pond – Unknown; could be used for fishing.

Residence – Unknown; could be a player or Axie housing/base.

Rivers – Cannot be passed by foot. Bridged over by roads.

Stone Statue – Unknown; could either provide buffs or purely decorative.

Trees – Can be cut down to collect wood.

Initial gameplay is reported to involve teleporting a team of Axies to specific resource/Chimera nodes on the map and having them walk back home afterward. There are also quests wherein you can turn in certain resources in exchange for rare tokenized items, blueprints, and skins.

No gameplay mechanic has been finalized/confirmed as of yet, and only a few pieces of information have been gathered.

The Future of Land

Given the addition of new gameplay mechanics, as well as events and resources, it’s safe to expect that things will be interesting as these developments unfold on release.

Although not a lot is known and no information is set in stone, the possibilities are limitless for the next stage of Axie gameplay.

This is simply Phase 1, and the next phase involves Lunacia SDK where players can create their games and art using pre-existing assets.

Dale is a student by day, writer by night, but an all-day gamer since birth. He is extremely passionate about video games and started playing before he could even read. His favorite games include: TES5: Skyrim, God of War, the Monster Hunter Franchise, and recently, Axie Infinity.
@RealLoadedGamer LoadedGamer

SLP Is Dropping: What Should I Do?!?

You know that sinking feeling you get when you look at the SLP chart lately? That lead weight at the

In this article, I’ll be putting the spotlight on the Bug card, “Anesthetic Bait.” As of December 2021, this card

In this article, I’ll be putting the spotlight on the Bird card, “Triple Threat.” As of December 2021, this card